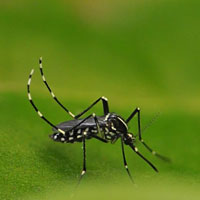 Ever since the science of mosquito control was established by the first Rutgers professor of Entomology more than a century ago, researchers at the Rutgers Entomology’s Mosquito Research and Control Program, since renamed the Center for Vector Biology (CVB), have worked seamlessly with Mosquito Control Programs in all 21 New Jersey counties. The strong collaboration between CVB and county programs is epitomized by county scientists such as Drs. Andrea Egizi, Bob Jordan and Greg Williams that maintain a Visiting Professor appointment providing internships to students and active mentoring.

Members of CVB research pest and pathogen ecology, evolution and control. CVB has a state-of-the-art molecular laboratory that develops and uses highly sensitive DNA-based tools. CVB researchers recently documented in NJ new pest species both exotic to the US and southern US species expanding north, and are developing strategies for their control.

CVB scientists are perennially called upon to forecast mosquito populations and when crises arise—think Zika—they are go-to experts locally, nationally and internationally. The recent hire of Dr. Alvaro Toledo an expert in ticks and tick-borne diseases, has synergized tick research at CVB coinciding with the recent discovery of the Asian longhorned tick in NJ. The team at CVB is conducting critical early surveillance and research efforts on this exotic tick and organized a statewide “Tick Blitz” that assessed the feasibility of statewide tick surveillance.
Rutgers New Jersey Agricultural Experiment Station