Habitat and climate determine which mosquito species will be present in any area. Larval requirements can be quite specific and vary widely. This page presents some of the characteristics of larval habitats for species found primarily in New Jersey (see our State Species list ).

Mosquito larvae can be found in numerous habitats. Each habitat produces specific mosquito species and show a seasonal progression of species in New Jersey. Habitats can be generally grouped into four types: Running Water, Transient Water, Permanent Water, or Container. 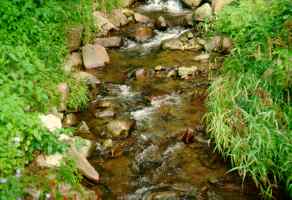 Running Water
-  Few mosquito species in New Jersey breed in running waters, such as streams. Larvae can be flushed out when stream volume increases, and to remain in the stream requires a large amount of energy. The tropical genus Chagasia (not found in New Jersey) and some Anopheles species are stream breeders. In addition, Anopheles quadrimaculatus, Culex territans, and Uranotaenia sapphirina have all been found in streams, although they prefer other habitats. Stream breeders will find vegetation along banks with which to anchor themselves or attempt to remain away from the main flow of the stream by seeking isolated eddies.

Transient Water - Transient water sources, such as flooded areas, snowpools, and ditches are used as breeding grounds for mosquito species whose eggs can withstand desiccation, such as Aedes and Psorophora. Their life cycles require alternating periods of wet and dry. Other species, like an opportunistic Culex, might be able to pull off a single generation during an extended flooded period. Transient water generally show water quality changes which results in various mosquito species using the same pool over a period of time. Transient waters include:

Permanent water - These waters (also known as Semi-permanent) are present for extended periods of time and support characteristic aquatic vegetation. Cattail, rushes and sedges are typical freshwater swamp vegetation. Genera associated with permanent water are Anopheles, Culex, Culiseta, Coquillettidia, and Uranotaenia. Eggs of these species are not desiccant-resistant and must be laid directly on the water. Aedes adults will oviposit near the edge of the swamp, or within tussocks of vegetation, requiring later flooding to inundate the eggs for hatching. As with transient waters, there is a seasonal change in the vegetation, water quality and mosquito species present. Permanent waters include:

Containers - Container water habitat can be found in both natural settings, such as water held by plants (bromeliads) to artificial settings, such as water found in tires. The habitat of containers are based on the containers themselves. Treehole sites generally have tannin-enriched water which is characteristically clear, with rotting wood at the bottom. Many treehole species now also use artificial sites, such as tires since they provide insulation against the weather and are more numerous. Artificial containers are a convenient mode of transporting a species of mosquito outside of it's natural range.