HISTORY OF MOSQUITO CONTROL IN NEW JERSEY (WHERE IT ALL BEGAN) 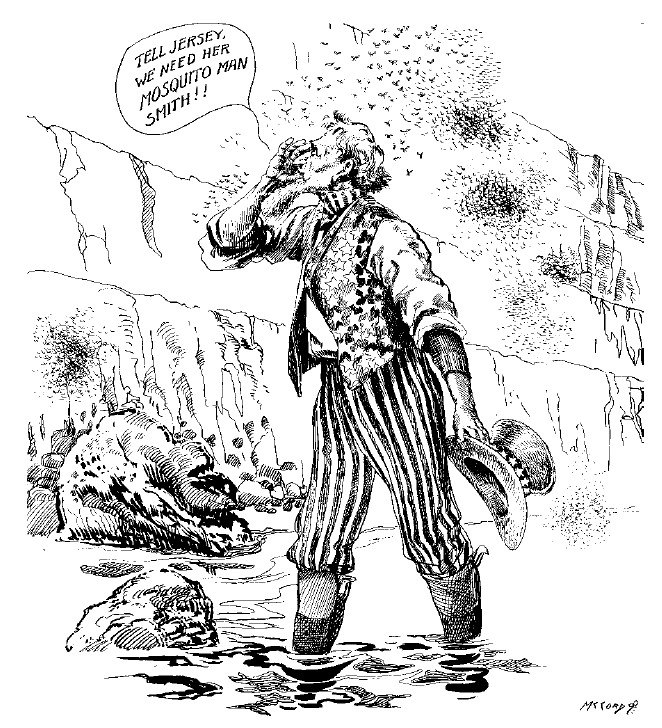 Mosquitoes plagued mankind long before history records their annoying and painful interference with daily activities. Thousands of years passed before it was learned that mosquitoes carry diseases that have killed countless millions of people, changing the course of history many times.

Early settlers of North America faced many hardships. Chief among indigenous afflictions was malarial fever which is said to have caused more anguish than the "threat of Indians."

In New Jersey, historians are not sure whether it was the British or the mosquitoes that drove the Swedes from the state.

Window screens, introduced in the 1880's, were called "the most humane contribution the 19th century made to the preservation of sanity and good temper."

Mosquito born yellow fever was known as the American plague since it had struck the bay colony in 1647. Yellow Fever also decimated Philadelphia in 1793, thus ending that city's supremacy in the young union. Appropriately, the disease was stamped out by an American doctor, Walter Reed an army surgeon who in 1900 with a team of heroic assistants traced its source to a virus carried by the Aedes aegypti mosquito. This eliminated, almost in a single blow one of the ancient scourges of mankind.

With many pieces of the puzzle of the mosquito's life cycle and disease transmission coming together at the turn of this century, organized, multi-disciplinary mosquito control became possible. New Jersey had many citizens and local governments interested in a crusade against the mosquito. Dr. J. B. Smith , New Jersey State Entomologist, did extensive research on the types of mosquitoes in the state and their life cycles.

Considerable public debate was given to the question whether mosquitoes could ever be controlled. Mosquito control operations grew in some towns but not in all towns. Newspaper battles raged when it was painfully noted that mosquitoes ignored municipal and even state borders. Local boards of health funded most of the extermination work. Laws in 1906 required support for local efforts from the state experiment station. Another law in 1912 directed the creation of county mosquito extermination commissions to assure full time mosquito work.

With an increase in mosquito control workers and their rapid progress, it became clear that an organization was needed within which these workers could discuss their problems and share their experiences. A convention of county commissions was held February 20 & 21, 1914 in Atlantic City and there created a permanent organization known as the New Jersey Mosquito Extermination Association. The annual meetings of the Association continue as a forum for New Jersey and national experts and workers to present ideas on funding and efficiency, reporting scientific results, questions and operational successes that could benefit others. The proceedings of these meeting are distributed and referenced worldwide.

Recognizing a national agenda for mosquito control, 15 leaders of the New Jersey Mosquito Extermination Association joined with 10 colleagues from other states and created the Eastern Association of Mosquito Control Workers at Trenton, NJ in 1935. It was this association that in 1944 was re-named the American Mosquito Control Association , the paramount organization in the field today.

The New Jersey Mosquito Extermination Association has changed its name to the N.J. Mosquito Control Association, Inc as it has led the way to modern, professional mosquito control headed into the 21st century.

"State Entomologist Dr. John . Smith has been requested by the Government to go to the Isthmus and use his system for the extermination of the Mosquito pest." - cartoon by McCord.